The Torajans occupy a mountainous area in South Sulawesi and are a group like no others. For them, life revolves around death, the most important thing for them is sending their loved ones to the afterlife with the respect that they deserve. Their funerals are expensive, elaborate and intriguing, but despite these fairly morbid undertones, they are some of the friendliest people I’ve ever met.

Typically, a small funeral will be held straight after death, with the the main ceremony held as soon as enoug money is raised. Families may live with the deceased for months or even years before the funeral is held, during which time they must talk to, dress and even feed their loved one, otherwise they risk showing a lack of respect.

At the funerals, animals such as buffalo and pigs are sacrificed. The animals carry the spirit of the deceased into the afterlife. The money spent on the elaborate shows of love and respect is staggering, with prized buffalo costing as much as a new house.

In order to witness this, my first job was getting to Sulawesi. Not so easy from central Flores, but 3 flights later (at least one of which having a potential gasoline bomb on board) I arrived in the island capital, Makassar. I was only there overnight before catching a bus first thing in the morning, so I went off in search of a cheap hostel. The one I was supposed to be staying at – the New Legends Hostel – turned out to be under renovation and had been for some time. “No worries,” I was told by a nearby porter, “you can just stay here instead.” And so I was pointed towards their sister hotel next door, which had the facade and interior of a posh 4* hotel. And what do you know? It was a posh 4* hotel, quite a step up from what I’m used to. But thanks to a combination of the renovation, the off season and my polished negotiating skills (if I say so myself), I ended up staying for a massively discounted price. The first comfy bed and hot shower I’d had in ages!

In the morning my Ojek driver took me to the wrong bus stop, before darting through the traffic to drop me off at the main terminal just in time. Sulawesi is another of Indonesia’s large islands, and consequently, you’re left lengthy bus journeys. The ride from Makassar to Rantepao in the heart of Tanah Torajah took over 10 hours, but being in the bus was like flying business class with huge seats that offered a near full recline.

We checked into a home stay and started planning out our stay. Every six days there is an animal market in Rantepao where Torajans descend from all over the area in order to buy Buffalo, pigs, fish, chickens and more, all of which will ultimately be sacrificed at the funeral ceremonies. The magnitude of the market was fascinating with hundreds upon hundreds of animals on show. It was however quite disturbing to see the conditions the animals are kept in. Buffalos tied through their nose to overhead lines so they are unable to properly rest, fish left out of water, and pigs strapped down to bamboo tables, squealing constantly in pain and in search of freedom. It is definitely cruel, it is definitely inhumane, and it is definitely a scene I couldn’t bear to watch, but this is a normal day for them and an important part of their traditions and so should not be judged from a foreigners point of view.

What’s more disturbing is the idea that tourism in the area is driven by an interest to witness a funeral first hand. And I was there for this reason too. Foreigners are welcome at the ceremonies provided that they, like the locals, bring gifts for the family. OK, foreigners don’t have to bring a pig along for sacrifice, but cigarettes and sugars suffice. 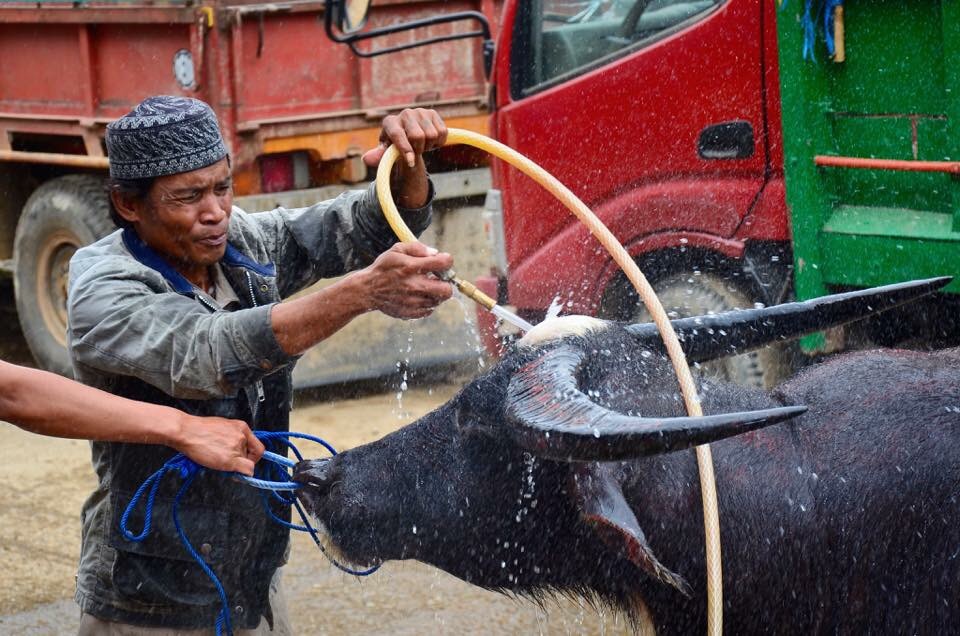 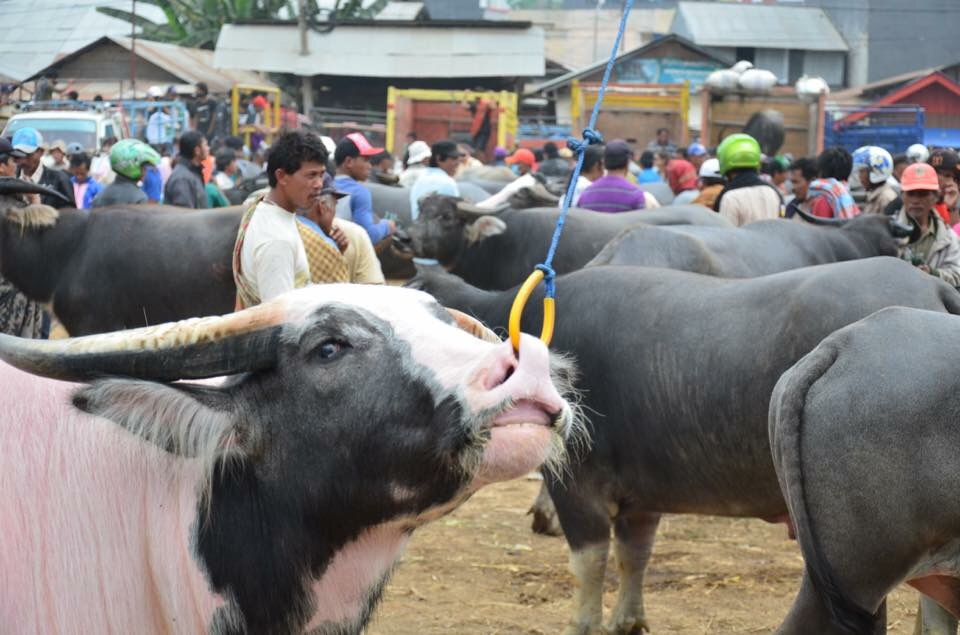 A local told us a funeral was going on that day, so we followed him to a nearby village. He was a trainee tourist guide and obviously had a bit more work to do, because instead of taking us to the funeral, he took us to a burial instead. 2 very different things. We sat there for hours in supreme hospitality talking with the locals, being fed bamboo roasted pork (fresh from the previous day’s sacrifice) and coffee before joining in with the singing of the hymns. Finally, the whole community walked through the street singing and chanting as the coffin was carried off for burial in the caves.

After a pretty heavy first day, we decided to take a day off from the morbid and went trekking through the local villages. There is more stunning scenery here, as I’ve almost come to take for granted throughout Indonesia, and as you climb further into the hills, the views just get better and better. The architecture is fascinating, similar to the Batak archaic true of North Sumatra, many houses are built with elaborate curved roofs, boast intricately decorated walls and for noble families, sacrificed buffalo horns are collected and displayed on the entrance columns. The houses are always aligned north to south. Smaller versions of these are usually present and are used for rice storage. With these structures in mind, you get the sense that this area is very wealthy in general, especially when you think about the money spent on the funerals as well.

Further into the countryside are some revered burial sites. Families are buried together and tombs are carved out in the rocks and cliffs in the hillside. Some cliffs host tens of families whereas some of the smaller ones host just one.

That night we got wind of a large funeral ceremony in the north – the funeral of a Nobleman. We went the next day for the first day of what would turn out to be a four or five day ceremony. Given the family’s status it was a huge ceremony and it seemed that everyone from the nearby villages was attending.

I had no idea quite what to expect, but, along with a gift bag of cigarettes and sugar, we followed the crowd and found the ‘arena’. I call it an arena for lack of a better word – bamboo stands had been erected surrounding a rectangular courtyard with entrances at the north and south. You walked up a slight hill to the main entrance, past grazing buffalo, and makeshift 7-11 stands selling drinks and snacks. Pigs were carried and dragged in to the arena and ditched in the central area, whilst a group of mourners formed a circle around offerings of meat and drinks, chanting and dancing to the gods. On top of that the master of ceremonies read in a deep, booming voice. Combined with the moans of the near lifeless pigs and the general noise from everyone attending, this was one of the most haunting and eerie environments I’ve ever been in. I think it’s safe to say we all felt quite uncomfortable.

The buffalo were sacrificed outside due to their colossal size. The sacrifice of the pigs was performed in the arena. I’d expected a more ritualistic approach to the sacrifice. Maybe an announcement, a prayer, or even a warning. The pigs were killed with a stab to the heart, right in front of where we were standing. It was a bit much for me, and for the ethics that I’ve been raised with, but again, it’s normal here, and kids were free running around the arena, unfazed by the blood, unfazed by the screaming animals, and unfazed as their elders started cutting up the meat. Some even started mimicking their actions. In a few years time I guess it will be their job.

That night I ate pork, slow cooked in bamboo. I didn’t even feel guilty. 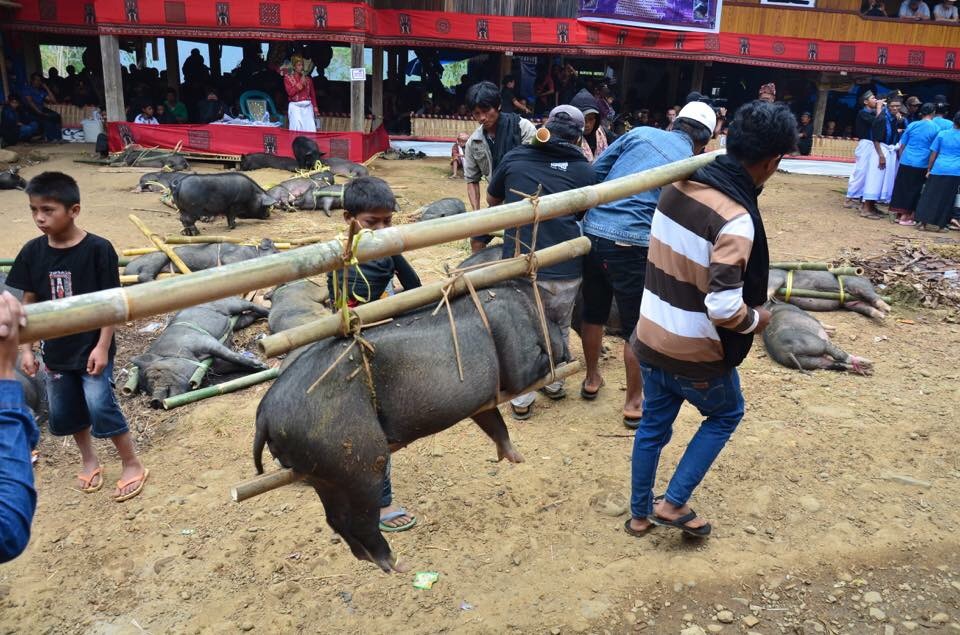 The next day we left Tanah Torajah and went north to the lakeside town of Tentena in Poso district. When I arrived in Sulawesi I had planned on visiting the Togean Islands – a group of paradise islands with fabled dive spots – but due to the length of time to travel up there and the infrequent and unreliable ferry schedule, I abandoned those plans in Tentena.

Instead, my last few days in Indonesia would be spent in a beautiful, sleepy lakeside town. Sleepy, but with plenty of surprises to keep me occupied. First and foremost is Seluopa Waterfall – a huge network or waterfalls and rock formations that goes on and on up into the hills. We followed the river back as far as we could and were rewarded with several picturesque lagoons, hidden away in the jungle. We ended up spending the whole afternoon here, and by the time we got some lunch and went back to town we had just enough time to visit the local villages before watching the sunset on the lakeside beach. 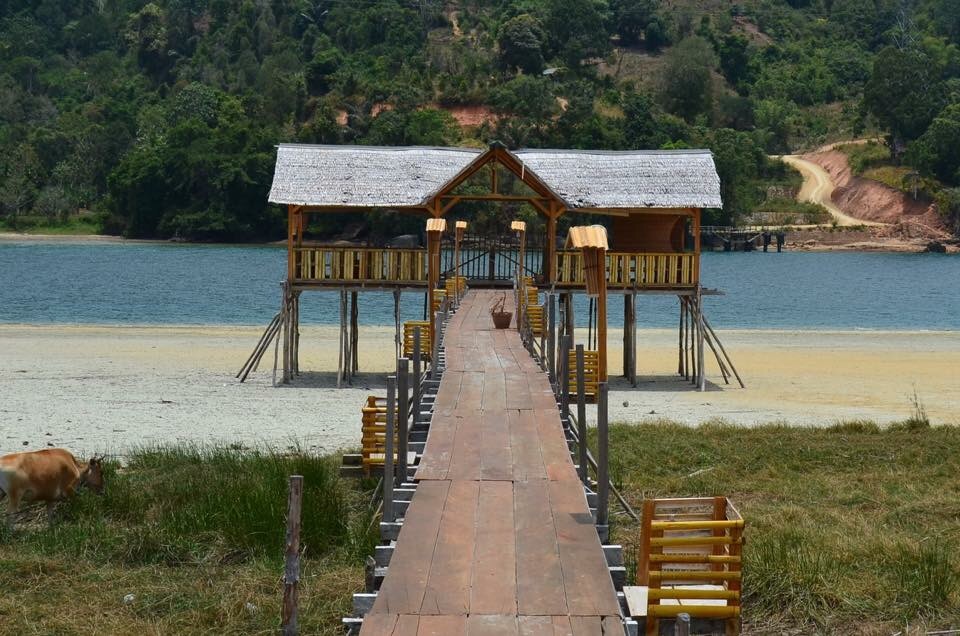 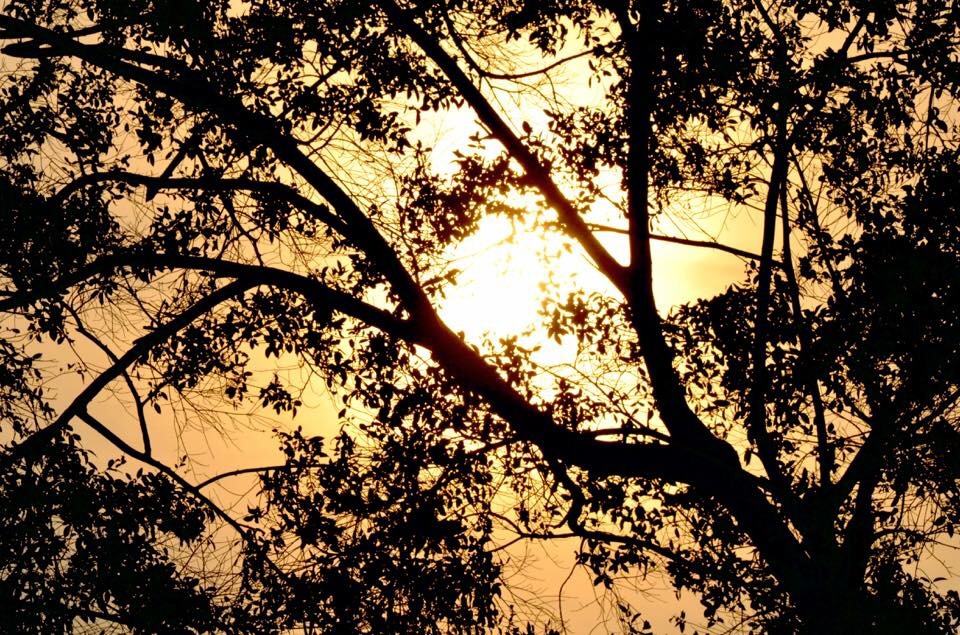 I had to fly out from Central Sulawesi as I didn’t have the time to make the long bus trips back to Makassar, but this meant spending a night in Poso. Poso is known as an area of conflict, where historically the Muslim and Christians…lets just say they don’t really get on all that well. Since an attack in 2005 that killed a number of locals and severely dented their tourist industry, things have been quiet there. Poso town itself is safe, with any trouble areas spreading out into the countryside. There was some great street food in town, but I was a little put off by the wanted signs on the street corners. The people here were so friendly and were just worried that they will never be able to shake off the reputation the previous conflicts have given the area.
It wasn’t how I would have planned to spend my last night, but, my time in Indonesia had come to end. I’d spent two months crossing six different islands, yet still hardly making a dent in the country. I think I could explore Indonesia for a lifetime and still be amazed at the new things I saw every day. I will definitely be back, I just need to figure out when.