The only place on earth which boasts the natural habitat of the mythical Komodo Dragon, is the Komodo National Park, located in the Nusa Tenggara, Indonesia. The harsh islands of Komodo and Rinca are almost desert like, but combined provide the homes to almost 5000 dragons.

I’d taken a boat from the north western tip of Lombok, which would sail around the top of Lombok, along the northern shore of Sumbawa before stopping off on the islands of Komodo and Rinca. It was to be a long trip. 3 days on the boat to reach Komodo, and a fourth to take us on to our final stop, the Harbour town of Labuan Bajo on the large island of Flores, east of the Komodo National Park.

There were 25 of us on the boat. Big enough to house us all for a few days but small enough to mean we’d sit on a combination of benches and the floor to eat our meals and crawl along on our hands and knees to reach our beds on the upper deck, who’s wood and tarpaulin roof stood at not much more than waist height. I’m giving the wrong impression, I loved the boat. I was lucky enough to share the experience with an amazing group of people, and, despite the small interior, the sun decks at the front and the top of the boat provided enough room for us to relax during the days and enjoy the sunsets and the star filled night skies later on. 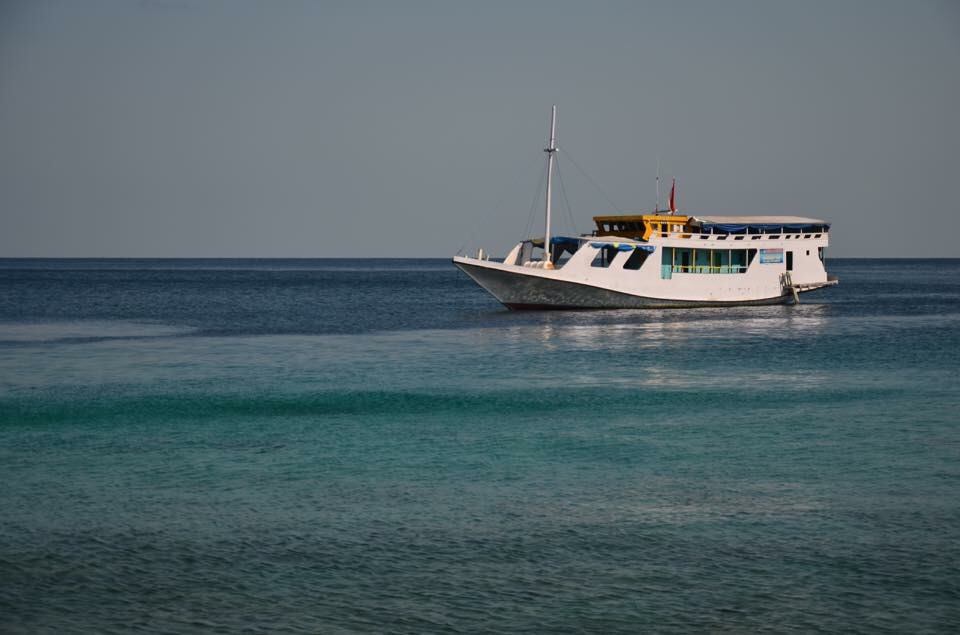 To break up the long trip to Komodo, the boat crew had scheduled in a few stops along the way. After we’d been woken up at 6:30am on the first morning (this would become a common theme) and eaten our breakfast pancakes, we swam to the shore of the nearby bay to explore an inland waterfall. My verdict was that I’d seen better, perhaps I’m getting a bit snobbish now and my standards have increased..?

After climbing to the top of the waterfall and exploring the pools that have naturally formed there, we headed back to the boat which took us to our next stop – Satonda Island. This small island located off the north coast of Sumbawa was formed after a volcanic eruption on the sea floor, leaving a fresh water crater lake approximately 2 square kilometres in size just above sea level. It’s surrounded by a thin rim of land, with the highest point just 300m tall. Nowadays the lake water is salty. This is due to a tsunami caused by the mega volcanic disaster of Mount Tambora in 1815 – the biggest volcanic explosion in human history. The seas around the island are lovely, clear and blue, meaning a perfect place for snorkelling, rich in corals and tropical fish.

By the afternoon we’d reached the eastern tip of Sumbawa, meaning we were out of the waters protected by the island, and in to the renowned territory of rough seas. So far the seas had been calm and enjoyable and I was having a hard time picturing the choppy conditions that so many people had described of this route. But by mid afternoon the waves had taken over and many of the boat were starting to feel the effects. When night fell it became even worse as you could no longer see when the waves would hit, instead we’d be rocked and thrown around without any warning. I decided to take a beer to see if that would take the edge off a bit, needless to say it was one of the least enjoyable beers I’ve ever had.

After dinner (nobody ate much), most people decided to try to sleep it off, but by about 10pm we were through the worst. Looking out the side of the boat I could see yet another clear night sky full of stars, and looking down, the faint glowing orbs of phosphorescent plankton were visible when the waves crashed into the side of the boat. Those of us who were left up turned the lights off to fully enjoy this ethereal moment.

When the sun came up, the boat was anchored in the calm waters of Manta Point in Komodo National Park, a polar opposite from the conditions the night before. Manta Point is just one of many fabled dive sites around Komodo, which is rich in a huge diversity of intriguing marine life. As the name suggests, it is common to see Manta Rays in this area, so after getting our snorkelling gear on, we all waited at the side of the boat, eager with anticipation as to what we might see. After sighting one or two Mantas, most people had jumped in. Avoiding the rush and the crowds, I waited further, and was rewarded when a group of 5 swam right past the boat. 2 of us dived right into the middle of the group, and for a few seconds were surrounded by the curious creatures before they dove fast and deep into the blue. We could only trail them for a short while before they were gone, but having been up close with huge creatures right on the surface was something special.

So after 3 days it was finally time. We’d been warned that it was now nesting season for the Komodo dragons and therefore it was not guaranteed that we’d see any. Unsurprisingly, most of the dragons we saw were around the entrance area where I guess they know that food is guaranteed.

They seemed remarkably relaxed around a human presence given their cannibalistic nature. They feed on almost anything they can get their hands (or claws) on, from deer, water buffalo, humans (attacks are uncommon but have been known in the past) to probably the most alarming – their own young. They swallow everything, bones and all, and in one sitting can eat almost their own body weight. After this, they will not need to eat for almost a month.

The mothers lay up to 30 eggs, and of those only a handful will survive – either due to the island’s conditions or because the eggs are eaten by other animals. Komodo’s live on their own, and so once hatched, the juveniles too are on their own. Until the age of around 5, the juveniles live in the trees to avoid being eaten by the adults who are at that point too large to climb.

When it is time to hunt, the dragons lie in wait. They are remarkably quick over land and can pounce without warning. Their saliva is so filled with bacteria that one bite is lethal to any animal, however, it can take up to 3 days for their prey to die once bitten. They use their incredible sense of smell to determine when their prey has finally succumbed, which they can track down up to 10km away. Of course this means that over dragons can smell the food, and so fights over dinner are very common. 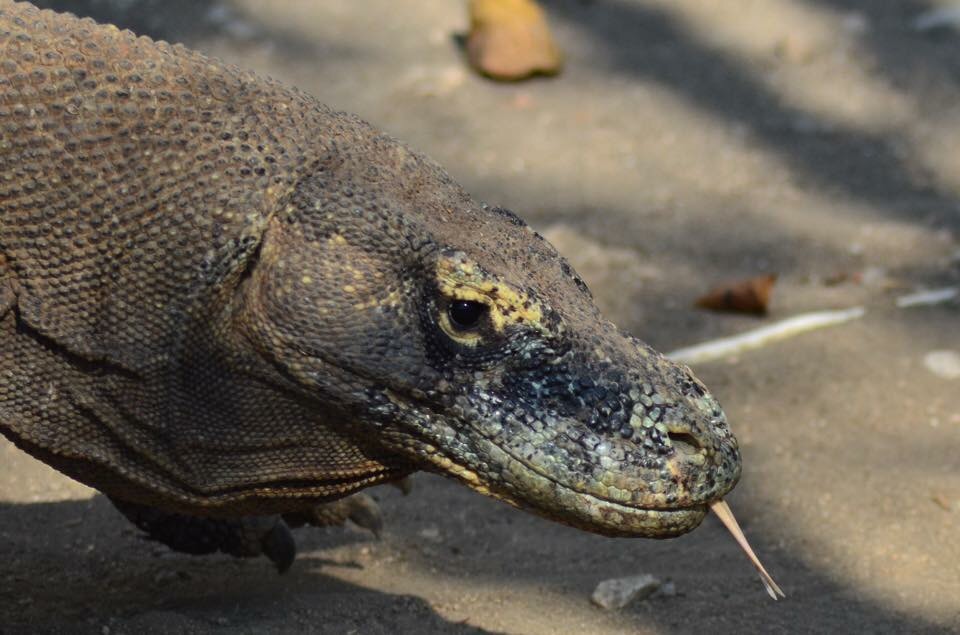 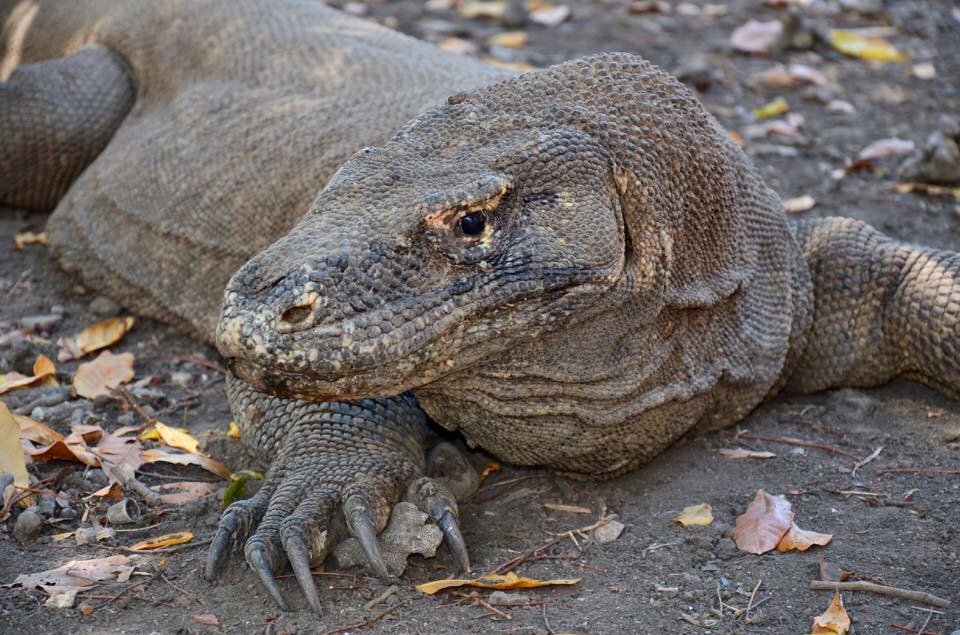 We explored the islands of Komodo and Rinca for a few hours each, and probably saw around twenty dragons, ranging in age and size from juvenile up to the 3m long monstrosities that they can become. In addition to this the islands are beautiful. Dry and arid yet enchanting. From a vantage point way up in the hills, we looked out over our boat and over the numerous islands that together make up the Komodo National Park.

Our adventure was almost over, but two surprises were left. The first was sunset over Rinca. As if it wasn’t breathtaking enough, when the sun finally disappeared and the sky filled with red, a colony of millions of flying foxes flew over our heads and into the distance of fading light. It was one of those moments where everyone just stopped what they were doing and watched as the display went on for almost 30 minutes. 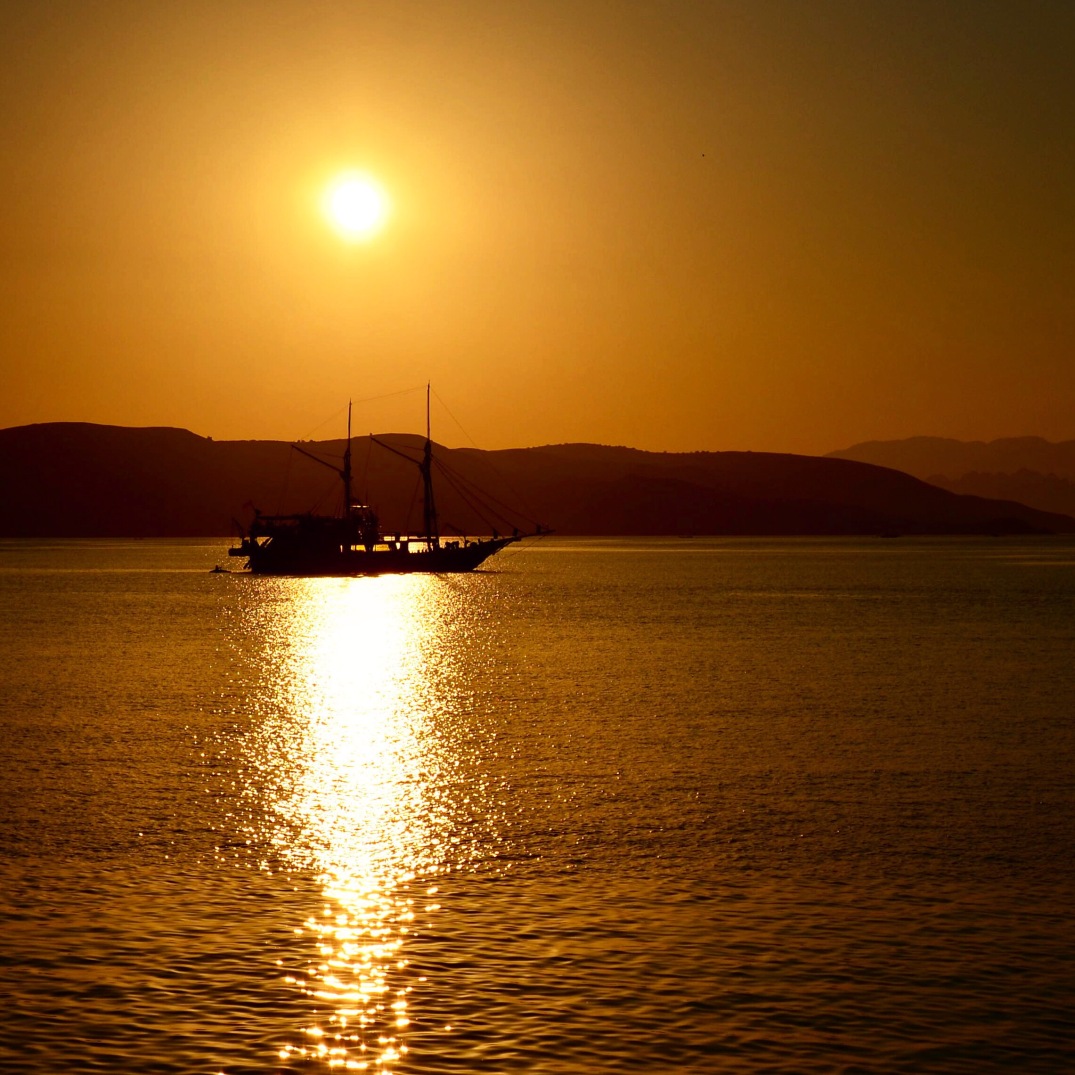 The final surprise was when the captain came down to the bottom deck, turned the lights off, and turned on a hidden disco light. The party went on until the boat had been drunk dry of beers. At that point, we crammed as many people as we could onto the top deck and enjoyed the company and the stars for one last night.