Overnight bus journeys are never fun, but I had a lot of ground to cover as I headed to the south of Vietnam, 17 hours worth to be exact. My destination was Dalat, a town way up in the mountains inland. The only reason I was travelling here was after hearing numerous recommendations from other travellers about the unique canyoning experiences (abseiling, sliding, jumping down waterfalls etc) that Dalat had become famous for.

Unfortunately, the day before I arrived, the outings had been suspended for a week whilst the dams were being cleaned – bad luck on my part! The pouring rain forecast over the next few days put me off the idea of trekking through the nearby mountainous terrain which would surely have provided some amazing scenery, so I found myself leaving first thing the next morning. I’d had just enough time to explore the bustling night market and Dalat’s Crazy House – a guesthouse that is a free wheeling architectural exploration of surrealism. Think Gaudi meets Dali meets Walt Disney.

From Dalat I went further south, to the coastal town of Mui Né. It was nice to take a regular bus instead of the sleeper buses which definitely aren’t designed for 6 foot tall westerners. But having to sit at the back of the bus on the poorly maintained roads down from the mountains was a hilarious experience in itself, being bumped and thrown in the air every 20 seconds or so for the duration of a 5 hour trip.

Mui Né is a small town with most of the hostels, restaurants and bars lining just one road down the beach front. Infact the whole town is essentially built on top of a stretch of sand dunes that extend for miles and miles until they reach the mountains.

I took a day trip to the ‘white dunes’ and ‘red dunes,’ stopping along the way at a quiet stream that meandered through a sandy valley to some fresh water springs.

The white dunes were a massive expanse that we raced around on quad bikes. I remember having a huge smile on my face for the whole 30 minutes I rented the quad for as I raced over the dunes, launching over bumps and flying off wind lips and rollers. I was clearly giving the quad a hard time as the chain came off after a heavy landing. I looked around and suddenly realised I was in the middle of nowhere, far away from where anyone else was riding. Luckily, the locals didn’t want to lose out on cash, and as I’d gone over my time limit they came looking for me pretty quickly. I got a ride back in on one of the locals quads and he showed me how to ride through the dunes properly, and we got back in half the time it took me to get out.

I’d heard that the red dunes were known for sand boarding, and after not having been on skis or a snow board for almost 2 months now I was keen to give this a go. Unfortunately, the sand boarding had been hyped up a little, so I just found myself sledging down a short chute on what was essentially just a plastic sheet. Fun though. You actually get a good bit of speed going and is impossible to control your direction, so if you set off at even a slight angle you end up tumbling down which I found out a few times.

As I was on the coast, and had been shown the nearby fishing village, I treated myself to some fresh fish (and cooked perfectly actually) which was a super nice way to finish up in Mui Né. Now for another night bus, this time to Saigon. 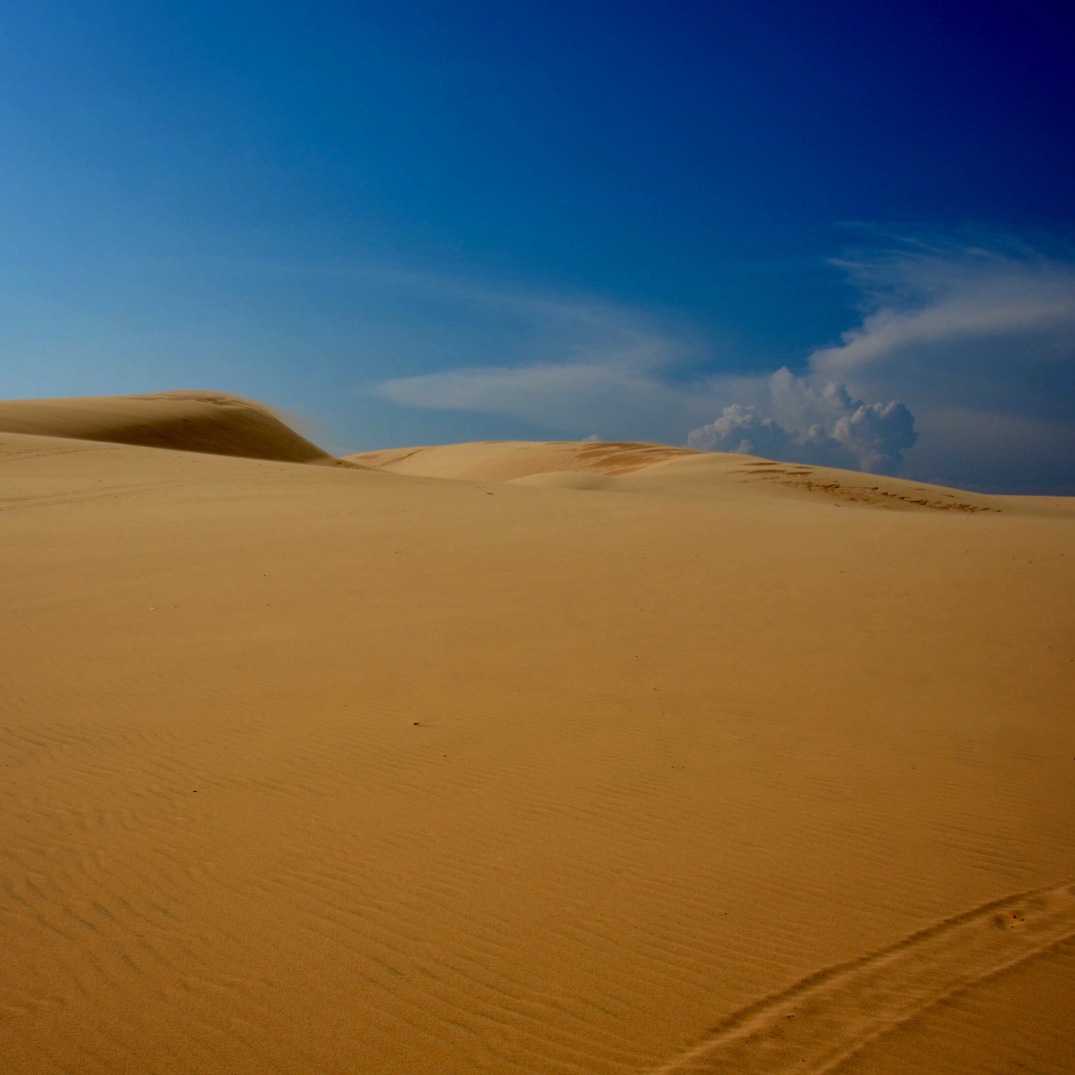